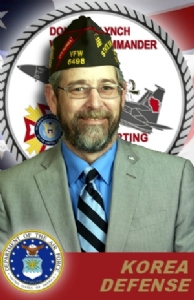 Don Lynch served 10 years n the US Air Force and his VFW Eligibility was earned during two stints in South Korea. He earned numerous decorations and unit citations.

He joined the VFW in 1995 as a Life Member, and quickly became a member of the Military Order of the Cootie, where he rose through the ranks and served as Supreme (National) Commander 2 years ago.

He belongs to Post 6498, Wauwatosa, and Cootie Pup Tent 6, Kenosha.

In civilian life Don had a busyand successful career in the HVAC industry, from which he is now happily retired.

Don and his lovely wife Lori were married in 2001 and he is a doting father of three adopted children: Anna, Samantha and Mitchel.

In his time in the VFW Don has served in many leadership capacities including Post Commander and key Chairmanships. He currently leads the Wisconsin Unmet Needs team and is also assigned to the State Bylaws and Resolutions Committee.

Ask Don what his goals are and he’ll tell you this:

"My goals for the upcoming years are to work closely with the Student Veterans of America (SVA) and work on getting younger members to join our Veterans of Foreign Wars.  I am also happy to work with Posts and their membership to get our great name out in the community more. We must show people what the VFW is all about and how we help all Veterans.  I would like to increase attendance at our Post meetings, District meetings, and our State Convention and conferences."