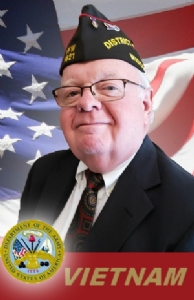 Bill Murphy is a member of Kienow-Hilt VFW Post 1621 in Janesville where he is currently the Post Commander.  He has also served as State Assistant Chief of Staff in 2015-16 and a member of the State Finance Committee in 2015-19.
An Army Veteran from November 1967 to August 1970, Bill served in Vietnam from June 1968 to June 1969.  He is especially interested in promoting and supporting the Wisconsin Unmet Needs Program.
Bill and his wife Madge Murphy, a Past Dept. President of the Wisconsin VFW Auxiliary, have two sons, Ryan and Andrew and four grandchildren.