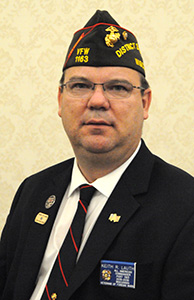 Keith’s second deployment was with the 15th MEU(SOC) aboard the USS Tripoli LPH 10. September 1992 – April 1993. The 15thMEU(SOC) spearheaded Operation Restore Hope in the Country of Somalia.

Keith was Honorably Discharged from active service on June 6th, 1994. Since leaving the service Keith has been teaching scuba diving for the past 24 years as a Master Scuba Diver Trainer. Also, numerous construction trades most notably as a HVAC Technician. Keith currently works for Ripon College as the Operations Manager overseeing the Maintenance, and Housekeeping Departments.

Keith is married to his lovely wife Cindy and has two daughters Emily (23) and Chloe (12). They reside in Beaver Dam.