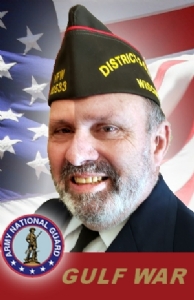 John Walker belongs to Shullsburg VFW Post 10533 where he is currently the Post QM. He is a Past Post Commander, earning All-State Honors in 2014-2015.  He is also a Past District 3 Commander and served as State Deputy Chief of Staff in 2017-2018.  John is also a member of the "Thundering 3rd District” VFW Riders.
A member of the VFW for 28 years, John was in the National Guard/Army Reserves for 12-½ years. He attended basic training at age 17, on summer break in 1979 between his junior and senior years in high school. He earned his eligibility while serving as a Combat Support Engineer in the Gulf War. Prior missions include 4 months in Panama in 1985, extended engineer projects on Chanute Air Force Base in 1984, REFORGER training in Germany and state emergency activation for the tornado which struck Barneveld, WI.
As a retired operating engineer after 35 years, John is now a Special Needs Teacher’s Aide during the school year. He carries the same compassion toward all students as he does to his Veteran family. He is a strong believer that "everyone is equal, nobody is perfect, and we all deserve a second chance”.  John is also very involved with other groups in the community, most notably Mental Health Matters, a large group of people who have dedicated themselves to reach out and make a difference.  His is especially passionate about Veterans in crisis:
"I recently had to perform military funeral honors for my lifelong best friend. We attended high school together, I was best man in his wedding, we served together in the same platoon while in the Gulf. His last birthday, three days before Veterans Day, he shot himself. I attended our schools’ Veterans Day program in the morning and drove straight to the cemetery for his burial duty immediately following. We need to stop our Veterans from committing suicide now!”
John feels blessed to have "an awesome support system” in his wife, Charla. They are blessed with two beautiful daughters. "My family is the one element that holds me together along with my faith. They help our Veterans right along with me. They support and participate in VFW functions quite often. Life is good! I look forward to a great year ahead visiting the Posts throughout the District and State. Let’s make a difference starting today!”