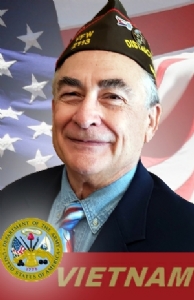 A member of DePere VFW Post 2113, Pat Moran has held a number of Offices at all levels including Post Commander; Post QM/Adj; District 8 Commander (3 times); and a variety of District Chairmanships.  He has also served as Military Order of the Cootie (MOC) Wisconsin Grand Commander and is presently serving on the State Convention Committee.  He also co-chaired the 2019 State Golf Outing.
Pat is an Army Veteran, serving from 1966 – 1969.  His duty stations include Viet Nam, Ft. Carson and Ft. Monmouth.  He is especially interested in the "Buddy” ® Poppy Program and the VFW National Home for Children.
Pat is married to Linda Moran, a Past Dept. President of the Wisconsin VFW Auxiliary.  Their youngest son is an Iraq Veteran and member of Post 2113.  Their oldest son and daughter are Auxiliary 2113 members.  Renee helped organize the golf outing alongside her dad.