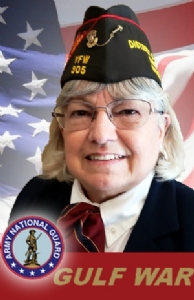 Mary Ann belongs to Eau Claire Post 305, where she has held many elected offices and appointments since 1996, among them Post Commander, Surgeon, Chaplain, Quartermaster and Poppy Drive Chairman.  She served as District 9 Commander previously in 2002-03 and was Captain of the All State District Commanders at the end of that year.  On the State and National level, Mary Ann has served in numerous programs, among them Community Service, Youth Essays/Patriot’s Pen, Youth Development, Resolutions and Patriotic Rally.  She also served as a National Aide-de-Camp in 2002-03.
A US Army Veteran, Mary Ann served for 30 years, with 10 years in the Wisconsin Army National Guard and 20 years with the Army Reserve.  Her overseas duty was in Saudi Arabia as a Combat Medic with Wisconsin’s 13th Evacuation Hospital during the Persian Gulf War in 1990-1991.
Mary Ann and her husband love to camp and travel, and their household includes a Tabby named Tigger and a Chihuahua named Simba.