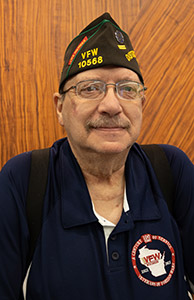 Born on the Polish South Side of Milwaukee in November 1950, Mark Sierzchulski (pronounced shesh-hool-ski) graduated from Notre Dame High School in May,1968 and entered the Air Force that December - on Friday the 13th.

After basic training at Lackland, "Ski” as he is also known, entered jet engine technician training at Chanute AFB, Illinois. His first duty assignment was to Norton AFB in California, maintaining C-141A Starlifter aircraft with the 63rd Military Airlift Wing. On two separate occasions he was selected as Airman of the Month, representing the Engine Shop.

Base in the Philippines, maintaining C-130B Hercules aircraft. After promotion to Sergeant, he did two separate TDY rotations with the Wing to South Vietnam, assigned to Detachment 2, 834th Air Division.  He participated in Lam Son 719, the ARVN incursion into Laos.

Upon his return to the States in September 1971, he served with Strategic Air Command’s 449 Bombardment Wing at Kincheloe AFB in Michigan.  His final nine months in the Air Force were spent on a 6 month TDY to U-Tapao Air Base in Thailand as part of the Easter Offensive/Operation Linebacker build-up. Mark separated from active duty in December 1972 and was Honorably Discharged

Continuing his love for aviation, Mark earned his private pilot license in 1975; his Airframe and Powerplant Technician license in 1980; and a Bachelor of Science degree in Aeronautics in 1981, majoring in aircraft maintenance management. His work career found him maintaining helicopters on off-shore oil rigs in the Gulf of Mexico to EMS helicopters at various hospitals in the Midwest. It was at one such hospital in Saginaw, Michigan where he met and married his

Recruited by Northwest Airlines in 1989, Mark worked his way up to Aircraft Maintenance Manager, retiring In 2010.His family includes son Ryan and daughter Brianna. A Life Member at VFW Post 10568 in Springbrook, Mark is in his sixth term as Post QM.  He is also a member of the 463rd Airlifters Association - Charter Secretary; Vietnam Veterans of America Chapter 331 - Three term President and 1991 Veteran of the Year; Wisconsin Vietnam Veterans Chapter 1 - Life member; and the U-Tapao Alumni Association.