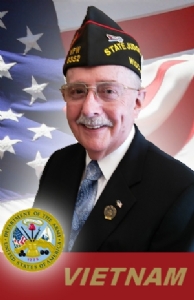 Bill "Knoot" Knudson earned his place in the VFW in Vietnam in 1965-66 with the 41st  and 39th Signal Battalions in Cam Ranh Bay and Vung Tau.
After service, Knoot had a successful career in broadcast sales, management and ownership from New York to California and New England. He and his wife, Marla Morgan, moved back to her home state of Wisconsin in 1992, settling in Marshfield where he became a Life Member of Mueller-Hintz VFW Post 1866.
Bill has been a Post Commander and Quartermaster, ran the District offices, including two terms as Commander (All-State in 2006-07.) He has helmed the Department's Web operations since 2007, edited the WI VFW News for several years, was Chief of Staff for Gary Erickson 2008-09, and  elected Judge Advocate in 2009, a position he loves and has held since.
"My brief time in service taught me a lot, and changed me a lot... for the better!", he says. "I am grateful that the VFW gives me a chance to put my experience and skills to work for great Comrades."  He is still motivated by Past CiC Jim Mueller's admonition to dedicate your time in the VFW to a Comrade who never came home. "That's a powerful, personal, motivation for me. I believe to my core that we truly Honor the Dead by Helping The Living."
"Of course", he adds, "it doesn't hurt if we can do that with a smile and a laugh from time to time. Lord knows we need the humor and camaraderie!"