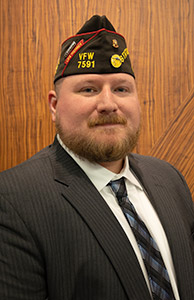 Adam grew up in the southwest suburbs of Chicago, Illinois.  He joined the Army Reserves as an enlisted Military Police Officer in 2007, when he was just 17 years old and still in high school.  He served in the 814th MP Company in Arlington Heights, IL, from 2007 to 2013.  In 2009 Adam cross trained as a Military Corrections Officer.  From 2010 to 2011, he deployed to Afghanistan in support of Operation Enduring Freedom with the 814th MP CO, Detachment 3. While in Afghanistan, Adam was responsible for training hundreds of Afghan National Army soldiers in detainee operations at the Detention Facility in Parwan (DFIP).

Adam joined the VFW in 2011 as a Life Member at the Lemont, IL Post 5819 where his grandfather, a Korean War veteran, was a life member.  He did not become active in the VFW until 2014 when he was in Dekalb, IL at Post 2287 where he served as Post Quartermaster, Junior Vice Commander, and Post Commander. He is now a proud member of Stoughton VFW Post 328 as a Gold Legacy Life Member.  Adam also serves as the District 2 youth chairman helping coordinate their youth scholarships.  In 2019 he served on the Council of Administration as the State Surgeon, and in 2020 was elected to State Judge Advocate.  In 2022 Adam was appointed as the State Adjutant.

Adam has dedicated himself to service in his civilian life, having worked as both state and federal law enforcement in Illinois and Wisconsin.  He currently resides in Stoughton, WI with his wife Dana.