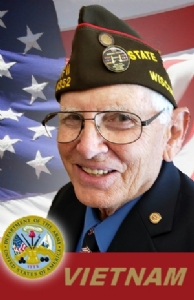 Norbert Lee earned his VFW eligibility serving in Vietnam as an Army as an Aircraft Rotor & Prop Repairman.  He joined Stratford VFW Post 6352 as a Life Member in 2002, and has been an active participant ever since, serving as his Post's Adjutant, Quartermaster, Commander and Trustee. He was an excellent 7th District Commander, and currently serves the District as Judge Advocate.
Because he is exceptionally diligent in keeping track of the details in everything he does, he was appointed State Inspector in 2015 and continues doing a great job today.
Norbert has always been a hard worker, and that shines through in everything he does in the VFW. He dedicates many hours to various VFW projects at his Post, District and as Inspector. He's a remarkable resource for Quartermasters and Commanders when they have problems in Post Operations. As Norbert says, "We set our goals high to help us be the best we can be."