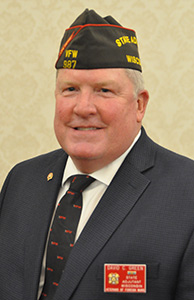 David grew up in Lake Delton and graduated from the Wisconsin Dells High School in 1980. He joined the US Army in February of 1984 and served at Fort Polk, Louisiana with the 5th Infantry Division and was then transferred to Germany as an infantryman in the First Armored Division. After three years overseas, David was stationed at Fort Carson, Colorado with the 4th Infantry Division before completing his initial time of service to finish his college education. He graduated in 1992 with a business degree and was the Distinguished Military Graduate at the University of Southern Colorado ROTC in Pueblo, Colorado. He was then commissioned as a Military Intelligence Officer, branched detailed to the infantry for four more years.

David continued to serve as a civilian lead trainer for the Kosovo Forces deploying to the Balkans’ Peacekeeping mission. He was also a part of the organizational change from conventional military fighting to counterinsurgency providing training to US Forces deploying to Iraq and Afghanistan, in Kuwait. He then became Deputy Program Manager in Afghanistan for training-- supporting the International Security Assistance Forces (ISAF) efforts enabling the Afghan Army and Police to take over the security of their country.

After spending 9 years overseas in some capacity, David is blessed that his parents are still living and were there for his return to Wisconsin after his military and civilian service to this country. He continues to serve Veterans as the Department of Wisconsin Veterans of Foreign Wars Adjutant. He is currently married to the former Jill Peters and between the two, they have 3 children, Kiersten Zillmer, Daniel and David Green Jr. They also have 2 grandchildren, Maxwell and Olivia. David and Jill reside in Portage, not far from their childhood homes in the Dells.