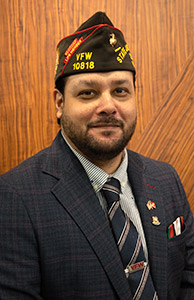 Ron Ramos currently holds membership as a Gold Legacy Life member at the New Richmond/St. Croix County Memorial VFW Post 10818. A member of the VFW since 2015, he has served in numerous positions to include Trustee, Adjutant, Service Officer, Jr Vice Commander, Sr Vice Commander, and Post Commander. He also edited the award-winning Post Newsletter: The Veterans Voice, which earned 1st Place in the Wisconsin VFW Publications Contest for three consecutive years and 3rd, 2nd, and the Grand Award at the VFW National Publications Contest. During his time as Commander, he earned the All-State designation to include "Captain" of the All-State team. Ron also earned the All-American Commander title his first year as Post Commander. Other positions he's held are District Jr & Sr Vice Commander, State Recorder, and he served on many committees within the District and the Department. Since joining the VFW, he has developed a passionate drive to serve his fellow veterans and advocate on their behalf.

Originally from The Bronx, NY, Ron is a Wisconsin transplant and credits the Veterans of Foreign Wars with saving his life and giving him a renewed sense of purpose. Ron earned his eligibility into the VFW while serving in the United States Marine Corps as a Data Analyst & System Administrator for both rotary and fixed-wing aircraft squadrons. He made multiple deployments to both Iraq and Afghanistan during his time as a Marine.

Currently, Ron resides in Star Prairie with his girlfriend Lexi (also a vet tech), daughter Adrianna, two dogs (Tucker & Patch), and three cats (Zoe, CJ, Willow). When he's not busy working for veterans or helping animals, he can be found tinkering with his Subaru Outback, which is affectionately known as the "Dad Wagon," doing graphic design work on the computer, and enjoying time with his family.