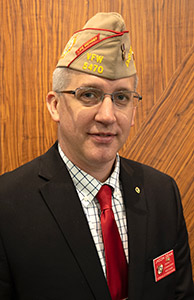 Jason grew up in Chicago, Illinois and joined the Marine Corps in July of 1997 as a Ground Communications Technician.  He deployed to Iraq in January of 2003 and again in January of 2006 in support of Operation Iraqi Freedom.  He was wounded in action while serving with 1stBattalion, 1st Marine Regiment, 1st Marine Division in Al Karmah, Iraq in 2006 and received the Purple Heart Medal for those wounds received in action.  In 2014, MSgt Dean was selected to represent the Marine Corps on the highly competitive Wounded Warrior Congressional Fellowhip Program where he served on the U.S. Senate Committee on Veterans affairs under the then Chairman, Senator Bernie Sanders.  His success serving in the U.S. Senate resulted in selection to serve in the Pentagon as the Special Advisor to the Deputy Assistant Secretary of Defense advising senior Pentagon officials on issues pertaining to wounded, ill, and injured servicemember.  He ultimately retired from the Marine Corps in November of 2017 and moved to Whitewater, Wisconsin with his wife and children.

Currently, he is the Commander of the Whitewater Veterans of Foreign Wars (VFW), Senior Vice Commander for the Wisconsin 1stDistrict VFW,  former Aide de Camp to the VFW Commander in Chief, and Wisconsin State Surgeon.

Jason is an Advanced Emergency Medical Technician on the Whitewater Fire Department as well as the Lauderdale-Lagrange Fire Department.  He also serves on Congressman Bryan Steil’s Veterans Advisory Board as well as his Service Academy Selection Board.  Jason has three children of which one lives at home. Jason’s oldest and middle son currently serve in the Marine Corps while his youngest lives at home.  Jason and his wife currently reside in Whitewater, WI.