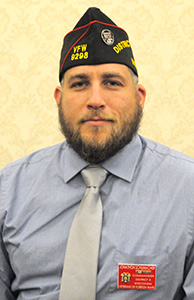 Jonathon grew up in Belmont, WI. Graduated from Belmont High School in 2002. Joined the Army Reserves in 2002 as a 12B Combat Engineer. Jonathon earned VFW eligibility with his two deployments to Afghanistan. 2004-2005 with B Co 367th EN BN Mankato, MN and 2010-2011 with 469th MAC Dodgeville, WI. In 2005, upon demobilization at Ft. McCoy, Jonathon joined the VFW as a member-at-large. Jonathon was Honorably discharged in January 2012 as a SGT.

Jonathon joined Ritchie-Bowers-Kohout VFW Post 9298 Montfort, WI in 2014. And was made Quartermaster in 2018. He is also a member of the VFW Riders Group District 3.

Jonathon currently resides in Montfort, WI with his wonderful better half Amanda and three children Genevieve, Geneva, and Garrison.