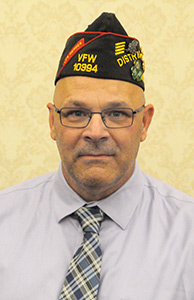 Andy served six years on active duty in the Navy from 1985-1991 as a Machinist Mate. He became eligible for the Veterans of Foreign Wars while serving aboard the USS Saratoga (CV-60) during Operations Desert Shield/Storm.

Andy Joined the Navy Reserve in 1999 and cross rated to become a Builder in the Navy Seabees. Andy deployed to Iraq with Naval Mobile Construction Battalion Two Five in 2006 in support of Operation Iraqi Freedom.

He retired from the Navy Reserve in 2014 as a Chief Petty Officer.

He joined the Hales Corners Veterans of Foreign Wars Post 10394 in 1992 and served as Post Commander 1996-1999. He has been the Post Quartermaster from 2002 to the present (minus the year he deployed to Iraq).

Andy is a life member of the Military order of the Cooties.

Andy has never been married and has no children, to quote the Captain at the base legal department "you’re the smartest one to come through here in a long time.”