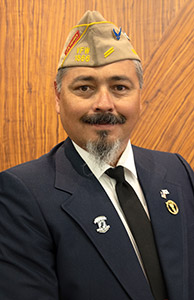 Hello, my name is Doug Mauritz. I have been a part of the VFW since 2001. My passion for helping veterans was sparked while I was a sophomore in high school, when my father and I participated in a couple of fund-raising walks to the little town of Neillsville, south of Marshfield about 32 miles as the highway goes. After high school in October of 1995, I joined the US Air Force, while enlisted I was sent on Temporary Duty from Eielson AFB to the country of Kuwait, for my efforts and the work of my teammates our unit, the 354th maintenance squadron, was awarded the Armed Forces Expeditionary Medal.

After leaving the service in January of 2000, I found myself working for a burial vault company, in the town of Marshfield, where my wife Jennifer and I currently reside, it was shortly thereafter I joined the Veterans of Foreign Wars. I have held the position of Post Judge advocate, Junior Vice Commander, Senior Vice commander, Post Commander and Post Quartermaster.

One of the highlights of this career of volunteerism for veterans came in the merging of two of my passions, helping veterans and riding motorcycles. The day stands out very vividly in my mind when I received notification from the VFW National headquarters that the application to form the seventh district riders’ group was approved. If you have ever been out on a ride with your friends, you understand that the brothers and sisters we make on two wheels are just as passionate about looking out for one another as our team mates back in the service. I look forward to participating in the ongoing events of the "Dirty fighting” seventh district riders and the Department of Wisconsin riders group that I am a founding member of.

I look forward to the next program year under Commander Rathke, we are both US Air Force veterans and both have a strong mentorship from great leaders like our current Department Chaplin Bill Knutson and past state inspector Norbert Lee (1943-2022).

My goals are simple. Utilize my education in supervisory management to return the seventh district back to the red carpet for all state recognition. Leading the way to District All American honors. Become a mentor to every person I recruit, all while continuing the efforts to help combat veterans and their families.

hank you for the time you give to the VFW, and I look forward to working with the entire group on many different levels. Go One T.E.A.M and Aim High!