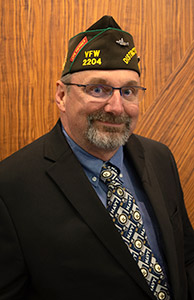 Randy L. Engness of Rice Lake is serving his first term as District 9 Commander.  He is a member of Harold Nelson VFW Post 2204 in Rice Lake, where he is a Past Post Commander. He served as District 9 Jr. Vice Commander prior to his election at the Spring District meeting.
Randy is the second of three generations of sailors in his family, with his father serving in Okinawa and his son as a Reactor Operator onboard a submarine.  Commander Engness served from 1983 – 1989, making seven patrols on the USS Daniel Webster SSBN626 and one patrol on the George Washington Carver SSBN656.
His decorations earned include: Enlisted Submarine Breast Insignia; Strategic Deterrent Patrol Pin with one Silver Star and three Gold Stars, Sea Service Deployment Ribbon with three Bronze Stars, the Navy "E” Ribbon and the Good Conduct Medal.

In addition to his membership in the VFW, Randy also serves as the Commander for the Western Lake Superior Base of the United States Submarine Veterans, Inc. (USSVI). He has also served them as Base Storekeeper.  He and his beautiful wife Louise currently serve as National Guard FRG Volunteers for the 829th Engineer Company in Spooner.