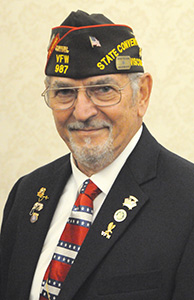 Gerald "Jerry” Parchem retired from the U.S. Army in Sept of 2005. He entered in the U.S. Army in 1966 and served with the 7th Division in South Korea as an Infantry Squad/Platoon Leader. He proudly received distinction as Division NCO of the Month in May of 1967. After discharge Jerry returned to school within the University of Wis-System.  During the U.S. Bi-Centennial Year, he returned to his Army Career by joining the Wisconsin Army National Guard in multi-MOS’s and was deployed with his 13thEvacuation Hospital Unit to Saudi Arabia in support of Desert Storm. After return, Jerry served in a full-time position as Program Coordinator for the Wisconsin Guard’s Drug Testing Program. He, with his team, received National Guard Bureau’s recognition as the nation’s most improved program of 2001. Upon retiring in September of 2005 with numerous military awards to include an MSM, ARCOM with 3-OLC’s, AAM w/OLC, & others, he then continued serving with the Guard’s Military Funeral Honors Team to provide Arlington National sanctioned Flag-Folding, Presentation & TAPS Honors to our Veteran Heroes throughout southern Wisconsin. He does consider this the ultimate service opportunity to provide each of our fellow service-members that have passed with proper acknowledgement of service.

After becoming fully engaged in the VFW in 2006, Jerry assumed duties with his local Post 987 as Buddy Poppy Chairman, Quartermaster and quickly to Post Commander.  He and a quartermaster together have achieved All-State Post status during a 6-consecutive year run and recently two additional consecutive years. He has been appointed to the VFW National’s General Resolutions Committee 3-times, and as a National Aide de Camp 6-times. Jerry has proudly served on the VFW State Honor Guard since being accepted in 2006 until retiring this summer. He also served as a 3-time Department Community Activities Chairman, MAP Chairman, Chief of Staff for PSC "Trapper” Schultz and now serves on the Department Convention Committee for a third year.

Jerry continues to serve as Post Commander of Post 987 of Baraboo, and is also serving as District Commander in District 11. Dedication to Duty is a responsibility of a VFW Officer who has taken an oath to serve to the best of his / her ability; that oath should guide one’s regular activity to support the Veterans of Foreign Wars, Department of Wisconsin.