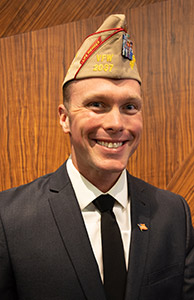 Staff Sergeant Kenneth Corry served in the United States Air Force on active duty for 6 and 1/2 years and 4 years in the U.S. Air Force Reserves. Sergeant Corry did four tours: two to Iraq and 1 to Afghanistan and Pakistan. He was awarded the Combat Action Badge; Army Accommodation Medal; Air Force Achievement Medal; Air Force Outstanding Unit Award with 4 oak leaf clusters as well as many others awards.
Ken currently works for the United States Department of Veteran Affairs as a Veterans Outreach Program Specialist helping Veterans who are struggling with PTSD and Military Sexual Trauma. A Life Member of Post 2037 in Green Bay, Ken is also a Past Post Commander. This is his first term as District 8 Commander.

In addition to his VFW involvement, Ken is the Chair of the Brown County Veterans Suicide Prevention Task Force; a Board Member of the Brown County National Alliance on Mental Illness (NAMI) and active with Bravo Company, North Eastern Wisconsin Veterans Battalion. Additionally, he is a Board Member of the Richard Mauthe Center in Green Bay and a member of Disabled Veterans Of America (DAV).