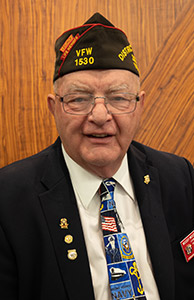 Dewitt "Woody” Woodworth earned his eligibility for the VFW with his service as a Radioman on the USS Kankakee AO-39, a Fleet Oil Tanker, during the Cuban Blockade. A member of the VFW since 1968, Woody is now a Gold Legacy Life Member of Post 1530 in La Crosse, as well as a member of Military Order of the Cootie Pup Tent 21 in Sparta. He earned multiple All-State Commander honors with Post 1530 and Post 8351, as well as District 11. He also earned All-American status as Post 1530 Commander.

A certified National Recruiter, Woody excels in membership recruitment and retention, as well as Post development and mentoring. He has been instrumental in starting several Posts in his District over the years, and has served as State Membership Chairmen multiple times. He has received many National appointments, including several terms as Aide-de-Camp.

Elected State Jr. Vice Commander in 2010, Woody led the Department as State Commander in 2012-2013, under the theme, "Strength in Members”. Since then, he has continued to contribute a strong effort in Membership, as well as serving the Department as the Veterans Administration Voluntary Services (VAVS) Representative at the Tomah VAMC for many years.

Woody remains a very busy champion for the VFW, attending many Department, Conference and National functions. But he still makes time for a round of golf (or two!) as often as possible.