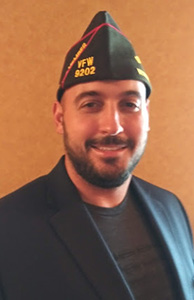 Mitchell Woytych is a member of Janesville Post #1621 since June 2021. Mitchell served 4 years in the Army. He graduated basic and went to AIT for becoming a cook followed by Airborne school and RASP (RIP). He was washed out of RASP after an injury and was stationed in Fort Bragg North Carolina in the 82nd as an Airborne "Spoon." He is VFW eligible from his tour in Iraq supporting New Dawn.

Mitchell wanted to continue to give back to his veteran community, so he joined the American Legion Service Office in 2015 part-time and with the help of Randy (Assistant DSO) created a full-time position for himself as the 4thclaims representative. After approximately six months he assumed the Assistant DSO position and pushed for more active roles for himself and American Legion. Mitch wanted more visibility for the office and pursued the Suicide Prevention Chair for American Legion, Chair on the Southeast Suicide Prevention in Milwaukee, expanded out-reach to the VA Milwaukee Hospital by visiting patients, did a Sunday radio show at MATC ran by veteran Brad Burt, and coordinated with Milwaukee Homeless Veteran Initiative and WCTC for volunteer opportunities for veteran students. When COVID hit, he spearheaded the transition of the American Legion Office to continue assisting veterans and their claims. After five great years with the American Legion Mitch was afforded the promising opportunity as the new DSO for the VFW on June 1st, 2021. Since taking the office he has implemented policies to give better customer care to our veterans for claims, started outreach virtually with schools, outreach to military installations in the area, and continuing Dan Driscoll's program helping nursing homes connect with the service office to assist the veterans and the spouses with claims.

Mitchell lives in Plymouth, WI with his Fiancé Patsy, her son Lucas with a baby along the way. He shares three great dogs Bean, Hamburger, and Duke with his lovely Fiancé. He often is working around the home, outdoors, on adventures with Lucas and Patsy, and at local venues. Family time is huge and often his extended family will come and watch Lucas play soccer, baseball and get the kids together for fun.