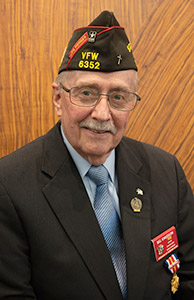 Born and raised in Buffalo, New York, William C. "Knoot” Knudson was drafted into the US Army in 1964 and trained in the Signal Corps as a Communications Center Specialist. He was assigned to units at Fort Gordon, Georgia and Fort Meade, Maryland, before being sent to the 41st Signal Battalion at Fort Lewis, Washington. In 1965, the 41st was deployed to Vietnam where Bill served until his term of service ended in 1966.

In his civilian life, Bill pursued a career in Broadcast Management, working at radio stations in New York, California and Connecticut, where he owned and operated his own station before moving to Wisconsin in 1992.

Since settling in Wisconsin, he has become active in the Veterans of Foreign Wars, serving in various capacities at Post, District and Department levels, including his present position as State Chaplain. "Many years ago, as I became more active in the VFW,” he says, "I learned from a VFW National Commander that we should each devote our work in this great organization to someone we remember who did not make it back from war. I have done that, for one friend in particular, but also for all those of my contemporaries who gave much more than I to the cause of Freedom.”

Knoot continues to honor those who have given all, and dedicates his time to helping those among us who are in need and deserving of the services and care that their nation has promised them. He also wants each upcoming generation to know and remember the lessons of our history and to help young people today to prepare themselves so that they will not only benefits from our hard-won liberties, but will stand prepared to defend them if and when they have to face the challenges of the future.

Bill and his wife, Marla Morgan, share their home in Marshfield, with their rescued Beagle, Petunia. In their spare time they like to camp, cook and read.  They have two grown daughters who live in Connecticut and North Carolina.  Both are Life Members of the VFW Auxiliary, in honor of their Dad’s service.