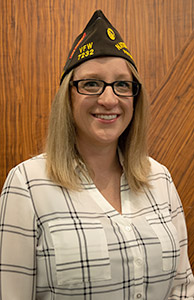 Dr. Angela Thomsen grew up in north-central Wisconsin, outside of the small town of Stetsonville. She enlisted in the Wisconsin Army National Guard as a Combat Medic in 2004, when she was 17. In 2009-2010, she earned her eligibility for the VFW through a deployment to Taji, Iraq in support of Operation Iraqi Freedom. Currently, Angela continues her military service as the Senior Medical Instructor at the Wisconsin Military Academy in Fort McCoy, Wisconsin.

Angela joined the Wisconsin VFW in 2012 as a Life Member at large. She transferred her membership to Minnesota Post 264 in 2014 where she served as the Post’s Judge Advocate for two terms. In 2018, she transferred to her current Post home, Post 7232 in Eau Claire, WI. She served two terms as the Post’s Junior Vice Commander and one term as Post Commander, earning recognition as the Post’s first female Commander. She also led the Post to earn their first All-State and All-American awards during the 2021-2022 Command year.

In addition to her Post positions, Angela has served as District 9 Adjutant (2021-2022), and now holds the office of District 9 Jr. Vice Commander for 2022-2023.  At the Department level, Angela was appointed as a National Aide-de-Camp by Commander Cory Geisler for 2021-2022.  In addition to her current appointment as State Surgeon, she serves on the State Legislative Committee and the National Committee on General Resolutions.

Holding a B.S. Degree in Psychology and Human Biology from UW – Green Bay and a Doctor of Chiropractic from Northwestern Health Sciences University in Bloomington, MN, Angela is a fully licensed Chiropractor in the State of Wisconsin. She has worked for two private Chiropractic practices, and is currently transitioning into the public sector, to work for an integrated, whole-health program.