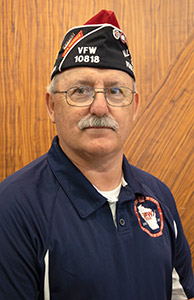 Mitch Cline served in the Minnesota Army National Guard from 1982 to 2007, retiring after 25 years, with the rank of Sergeant First Class.  He earned his VFW eligibility with a 16-month tour in Iraq, serving in the S-4 section of the 1/34th BTB, 1st Brigade, 34th Infantry Division.
Joining the VFW in 2006, Mitch became active in 2014.  A Silver Legacy Life member of VFW Post 10818 in New Richmond, he has served as the Post Quartermaster for the last 6 years.  Mitch is a 3 time All-American Quartermaster and earned All-State Quartermaster for five consecutive years, serving as Captain Quartermaster of the All-State Team one year, and Co-Captain in 2019 and 2022.
After working 33 years in Healthcare Maintenance, Mitch retired in 2018.  He lives in Hudson, WI with his wonderful wife Karen.  They have four adult children and eight grandchildren.  He says, "I’m enjoying retirement with my family, friends, and being active in church and the VFW.”