The 157th supported the Army's 1st Armor Division in the exercise, which simulated the 1st Armor Division and 35th Infantry Division expelling an enemy force with similar combat capabilities out of a foreign country at that nation's request.

For the 157th Soldiers, the exercise demonstrated to commanders how sections work together to accomplish a complicated mission, and how subordinate and command units coordinate together. Most importantly, it taught Soldiers the importance of their individual tasks. The 157th MEB's role in the exercise was to support the 1st Armor Division by providing freedom of movement and security in the rear battle space.

Known as Warfighter 17-3, the exercise provided a way to realistically simulate critical decision-making at a headquarters. As a maneuver enhancement brigade, the 157th is responsible for ensuring maneuver units are sustained and properly equipped for operations.

Brig. Gen. Mark Anderson, Wisconsin's deputy adjutant general for Army, said "When it comes to trying to replicate the experiences and challenges associated with actual combat and the ability for a brigade headquarters to control organizations, clear battlespace and fight an enemy, while supporting a maneuver headquarters, the Warfighter exercise is about as close to that as possible."

Soldiers are expected to be proficient at their duties and work alongside other sections within their unit.

Command Sgt. Maj. Daniel Sullivan, the senior enlisted Soldier in the 157th MEB said, "While I always knew the Soldiers of the MEB were professional experts in their respective skill sets, they have certainly exceeded my expectations with the level of support that the 157th has provided to the 1st Armor Division's mission."

The Warfighter 17-3 learning environment allowed different units to come together.

"We've gone through annual trainings before, but not to this extent," said Sgt. 1st Class Blair Gorsuch, a platoon sergeant with the 357th Signal Network Support Company.

Through supporting communications for the 157th MEB, Soldiers of the 357th were able to observe operations and actively participate in Warfighter 17-3.

Spc. Vanessa Pelnar, a transmissions systems operator with the 357th, said, "I think it benefits everyone to see how the operations work together."

National Guardsmen receive a limited number of training days and can sometimes be tasked with duties unrelated to their job. Warfighter 17-3 allowed Guardsmen to utilize their training to accomplish their assigned missions. 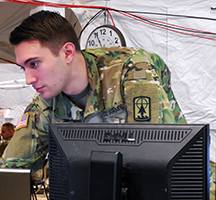 "We have a lot of Soldiers that don't always get to execute the type of training they've received," said Command Sgt. Maj. Rafael Conde, the senior enlisted advisor for the Wisconsin Army National Guard. "There's no one job more important than others. It's a combined fight. It's a great opportunity for those young specialists and sergeants to really get into their jobs."

Junior Soldiers interacted with experts during the exercise to help the 157th MEB become a well-balanced and efficient fighting force.

"It's pretty rewarding," said Pfc. Joshua Rozek, a military police Soldier with the 157th MEB. "Our leadership will teach us what they are doing and the meaning behind it."

Through communication with leadership, Soldiers learned their job expectations.

Mueller said that her section's primary goal in controlling the air space within the simulated area of operations is to ensure the security of civilian and military aircraft. Missions could become compromised if her section does not communicate with the rest of the brigade.

The radio operators within the brigade are essential for information transmission.
Pfc. Zach Gianakos, an intelligence analyst, explained the importance of his work within the unit.

"We can take information provided or request information to verify legitimacy, relevancy, and significance to brief the commander and update other sections," he said.

With open communication and accurate information, the leadership of the 157th MEB is able to make decisions in order to minimize casualties and create the best environment for the people of the simulated host nation during Warfighter 17-3.

"We don't operate in a vacuum," said Sgt. 1st Class Tim Connolley, noncommissioned officer in charge of civil affairs with the 157th MEB, "We have to consider the people, government and infrastructure we're working with."

While the needs of the host nation are always a priority, Soldiers are the heart of every unit and the MEB is equipped with personnel dedicated to taking care of Soldiers.

"The unit ministry team has a diverse role," said Staff Sgt. Shawn Wehner, a chaplain's assistant. "Morale and welfare of the troops and their freedom to practice their faith is the lifeblood of our team."

As a result of the exercise, the 157th's leadership was able to learn about the quality of the Soldiers in their organization.

"I fully believe we have good, hard working, smart and capable individuals in the MEB," Sullivan said.

He went on to say that the 1st Armor Division commander praised the good work and value that the 157th brought to the fight.

The Warfighter exercise is another example of how the 157th MEB is ready to complete any federal or state mission at any given time.

As the primary combat reserve of the U.S. Army and the first military responder in the homeland, exercises like these help ensure that the National Guard is always ready.